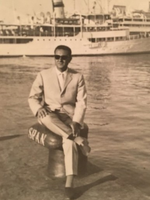 Due to the current public health conditions all funeral services will be private.

To our family and friends, we deeply appreciate the outpouring of love and support during this difficult time.

In lieu of flowers, the family requests that donations be made to the Alzheimer’s Association in Concetto Zaccaria’s name – a Tribute Page has been created for this purpose:   http://act.alz.org/goto/Concetto_Zaccaria

Concetto Zaccaria was born in a small town in Sicily, Italy, the youngest of six siblings. With an adventurous spirit, as a young man he left for Messina, Sicily and thereafter Milan, Italy for work. After some years in Milan, he set sail for South America - Venezuela to be exact, where he established himself in the shoe business, and met his wife of over fifty-seven years, Onofria LoRe.  After the birth of their daughter Carmela, Concetto and Onofria made the move to New York City where they successfully built their lives, establishing businesses and raising their family, which by now included the unexpected arrival of twins Anthony and John.  Concetto loved watching soccer and basketball, fishing, apple picking, spending time with Onofria in Aruba, wine making, Limina’s patron saint, Saint Philip of Agira, and playing bocce (serving as his league’s president for many years). But, above all else, Concetto was devoted to and loved his family, serving as a constant unwavering pillar of support who made everything okay again with his simple words of encouragement.  Concetto instilled the importance of education in his children and grandchildren.  He also taught, always leading by example, to respect others and oneself, making friends easily and making strangers feel at ease. And, Concetto had a love for life until the very end, refusing to miss any opportunity to travel to among other places, Las Vegas. Concetto leaves behind his wife Onofria, children Carmela, John and Anthony, son-in-law Paul, daughter-in-laws Dayva and Sylvia, grandchildren Michael, Francesca, Julia and Carlo, and countless family and friends.  Concetto is very much loved and will never be forgotten.