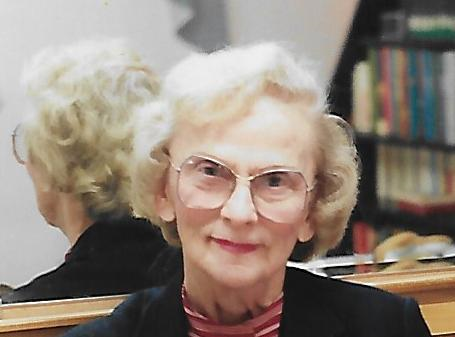 Please share a memory of Marie to include in a keepsake book for family and friends.
View Tribute Book

Born in Brooklyn on June 10, 1926, Marie Fox McCarthy was the beloved wife of the late Daniel J. McCarthy, devoted mother to daughter, Noreen Mercaldi , son , Glenn Fox McCarthy, and mother-in-law to Phil Mercaldi.  She was the proud grandmother to Danny, Rick, and Andrew Mercaldi.  Marie was the loving daughter of George and Nora Fox and sister to George, Eleanor, Clara, Bill, and Florence.   Moving to 86th Street in Glendale in 1928, she was a proud part of one of the founding families of Sacred Heart Parish.

She attended P.S. 113 and Dominican Commercial High School. As a teenager, she began work as a colorist in a photography studio.  She was also talented in music, playing piano and Hawaiian steel guitar.  Winning the Dominican Commercial Job Search Competition, she scored the highest in typing and stenography and became an executive secretary to high-ranking Army officials at La Guardia Airport during World War II.

In 1958, she married Danny McCarthy and had her two children, giving up a career she loved to be a full-time mother which she believed was her most important job in her life. She later went back to work as a legal secretary.

Her faith in God had always been the foundation of her life.    Her love of her children and grandsons and the rest of her family was the cornerstone of her life.   She leaves behind heartbroken family and friends who always knew that if she was in their corner, she would defend them to the end.

To send flowers to the family or plant a tree in memory of Marie McCarthy, please visit Tribute Store
Sunday
16
May

Share Your Memory of
Marie
Upload Your Memory View All Memories
Be the first to upload a memory!
Share A Memory
Send Flowers
Plant a Tree