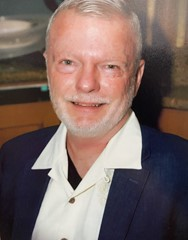 Please share a memory of Robert to include in a keepsake book for family and friends.
View Tribute Book

On Tuesday January 25th Robert Winters took his final bow at the age of 73 after a valiant battle with cancer. Bob so tenaciously fought and came out a hero in his final days. He was surrounded comfortably at home in Queens by his loved ones as he transitioned into the heavens.

Robert spent a lengthy career in finance until he earned his retirement in 2016.

When Bob was not cruising the Caribbean with the love of his life Sonia, or scuba diving the coral reefs with Daniel and Loretta, He would be playing basketball with friends and his Grandkids. Being a diehard fan of the NY football Giants, and NY Yankees he would always have the television on in the background at family gatherings, A daunting task when both NY football teams played on separate channels at the same time. Bob would have a Rum drink in hand with his favorite Tommy Bahama outfit on. He was always smiling, and always getting a cameo in family photos. Some of his favorite pastimes included researching stocks, reading consumer reports, playing paddleball and playing poker. His smile, his laugh and his charisma would command attention to everyone in the room, wherever that may be. He was known to many as the mayor, and even had a Mojito named after him at his favorite restaurant.

Robert’s legacy will carry on in all of us, family first, work hard, travel often, and live life to the fullest.

A memorial service for Robert Winters will be held at Fox funeral home on Sunday February 6th at 12-5pm at 98-07 Ascan Avenue, Forest Hills, New York

To send flowers to the family or plant a tree in memory of Robert Winters, please visit Tribute Store
Sunday
6
February

Share Your Memory of
Robert
Upload Your Memory View All Memories
Be the first to upload a memory!
Share A Memory
Send Flowers
Plant a Tree