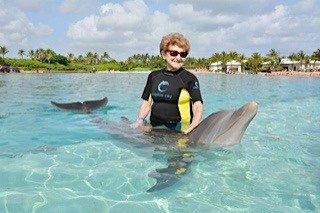 Please share a memory of Nellie to include in a keepsake book for family and friends.
View Tribute Book

Nellie Vega, 96, beloved mother and grandmother, passed away in Forest Hills, New York on October 31, 2020, after having a beautiful fulfilling life.

Nellie was born in the small town of San Sebastián, Puerto Rico in 1924.  She moved to Manhattan as a young girl, where she met the love of her life: German (Gerry) Vega, an extremly witty, funny, handsome and charming Spaniard born in Manzaned, Spain.  They married and settled in Forest Hills, New York, where she worked as a nursery school teacher and he as a building manager, and where they raised their two daughters: Lillian, who eventually became an entrepreneur along with her husband in the Bahamas; and Rose, who became a prosecutor, first as Assistant District Attorney in New York and then as an Assistant U.S. Attorney in Puerto Rico.

Nellie was smart, sweet, funny, witty, glamorous, charming, and vibrant. She believed strongly in the power of prayer, and was known to bless all those who crossed her path, giving even the pope a run for his money.  But more than anything, she was loving. She shared her love with everyone around her, and was loved by all in return.

She was an avid reader who enjoyed going to plays, cruising, dancing and socializing with friends.  She lived life to the fullest until the very end, enjoying throughout her ninth decade what she called the "Adventures of Nellie and Rose," which included experiences as diverse as conquering her fear of roaches by petting an a African Roach at the Mayaguez Zoo in Puerto Rico, swimming with and kissing dolphins, tubing down lazy rivers, and dancing at Ricky Martin and Jennifer Lopez concerts in Las Vegas.

Nellie is survived by her daughter Lillian, together with her husband Jody Mooree and their children, Megan and Jack; and her daughter Rose.  She will above all be greatly missed.

You may send flowers to the Funeral home or make a contributiion to a charity of your choice in her name.

To send flowers to the family or plant a tree in memory of Nellie Vega, please visit Tribute Store
Thursday
5
November

Share Your Memory of
Nellie
Upload Your Memory View All Memories
Be the first to upload a memory!
Share A Memory
Send Flowers
Plant a Tree